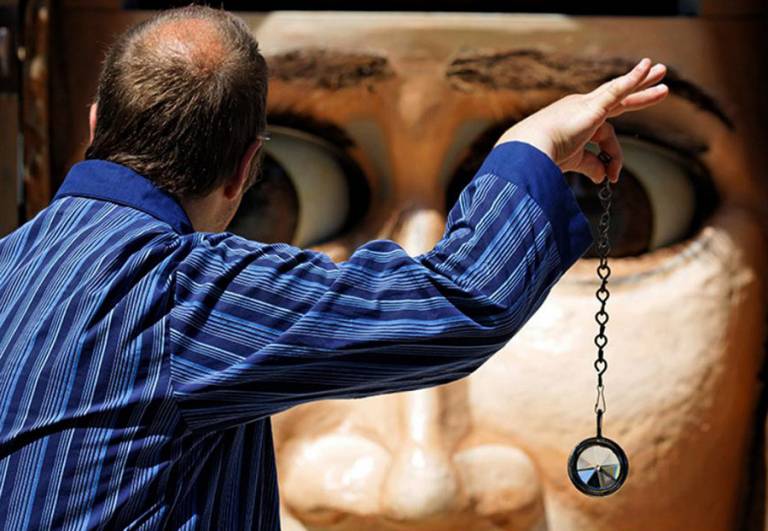 How did you get here?

I got a lift with Sue in the car.

*sighs* I mean how did you get to the position of having this website featuring your drawings?

It’s a long story so bear with me.

I studied fine art at Wolverhampton Polytechnic in the 70s. When I left I moved to North London and did a variety of odd jobs which allowed me to paint pictures in a room in a shared house.

I was beginning to feel that although my paintings were becoming technically accomplished  they didn’t seem to be anything like me. This feeling corresponded with an opportunity to be a musician  ( I also play percussion ) on a site-specific show in Leicester Marina by Horse + Bamboo. I had met the artistic director of the company Bob Frith when I was at college.

When I arrived at Leicester one of the Dutch performers had to return home as his father was seriously ill. I took his place – it involved climbing out of a canal  wearing a submarine escape suit   and carrying a small trunk. The trunk contained a puppet show which I performed to the audience who were sitting in a theatre which all the company had made using wooden palettes in the week before.

It all went well, I went home to carry on painting and then got an invite to re-join the company on its annual summer tour. We toured to Accrington and Bacup

Padiham and made a big wooden horse on the moors above Whitworth. I met Sue Auty who was working with Dogtroep  of Amsterdam.

When the summer tour ended I went back to London whilst Sue went to Amsterdam to work on a big site-specific project in the Melkweg – a hippy art centre. She somehow managed to convince Dogtroep to invite me over for the month-long project.

It all went well. I got invited to work on another site-specific show at the Paradiso

Shaffy Theatre and from there I went straight into a summer tour of France, Belgium and Holland.

Dogtroep were a fantastic company to work for but Sue and I were starting to get ideas that wouldn’t fit into what the company were doing.

So we formed the Whalley Range All Stars in 1982 to realise those ideas. We didn’t want to mimic what Dogtroep did artistically but we did want to mimic the way they approached work – which was to explore as many different ways of presenting work to the public as possible.

It seemed more interesting to make a leap into the dark rather than carry on painting pictures that were becoming increasingly dry and technical. If it all went wrong I could always go back and try and incorporate what I had learnt performing into the paintings.

Since then we have toured the world and won artistic, critical and popular acclaim for our work.

Most Whalley Range All Stars shows start life as a long series of drawings. The drawings are variations on a theme.

For example: our last show Ye Gods was based on a model village set on a 5m diameter circular floor cloth. The drawings explored what it would be possible to do within that “limitation.” A few images made it from the drawing stage to the actual performance but I find them useful to do as a way of thinking myself into the show and uncovering possibilities as to how the show might progress. Very useful if a rehearsal has ground to a halt.

Other drawings have a life of their own. These are the ones you see here.

What materials do you use?

At the moment I use Indian Inks. I draw out the composition in pencil and then ink it in.

I drew with acrylic inks for a long while but at the moment I prefer the look of Indian Ink washes.

Recent drawings for a new table-top object theatre show have depicted the objects in colour with the operators/puppeteers in Vandyke Brown crayon and black ink. I did it this way to emphasise that the focus should be more on the objects than the manipulators.

The woodcuts of Japanese Ukiyo-E artist Kuniyoshi,  Giotto, the Italian cartoonist Lorenzo Mattotti, Jan Svankmajer, Michael Andrews’ painting “The Man Who Suddenly Fell Over”  too many to mention really.

I would also put in a mention to Colin Harrison who taught me at Wolverhampton Polytechnic. He died recently ( I’m  writing this in November 2017 ) and  thinking about him made me realise what an influence he had been, not because of his work ( which took the form of  intensely detailed drawings and paintings playing with different methods of representation )  but for his approach to that work and how it fitted in to the larger picture.

Finally where do you get your ideas from?

There are 2 answers to this question:

1.) Ideas breed ideas. I draw pretty constantly – sometimes an idea presents itself as a bad idea when I’m drawing it but I carry on as if it doesn’t end up on paper it hangs around in your brain and interferes with other better ideas.